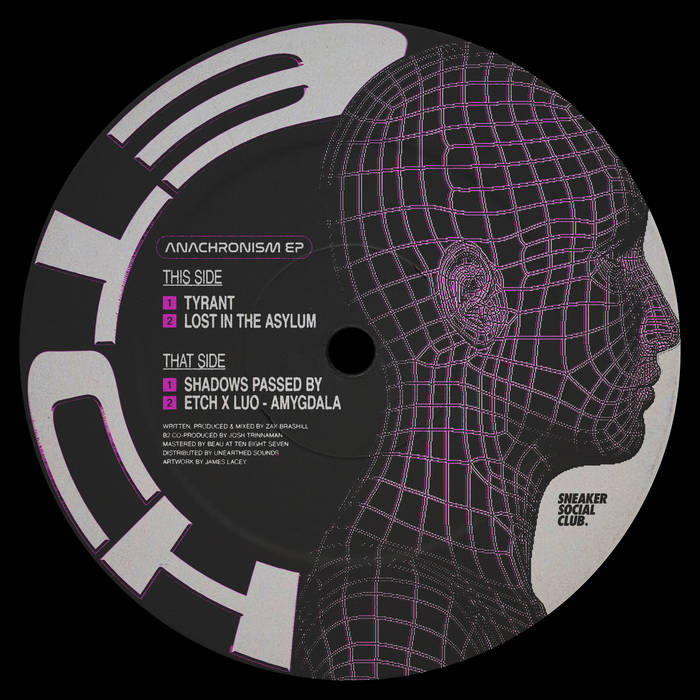 By now it’s common knowledge that Etch is one of the brightest sparks working in the field of contemporary breakbeat mangling. The Brighton-based producer has the depth of knowledge about breaks, and the expressive affinity for how to slice and rearrange them, to rank among some of the greats. We’re talking Photek, Paradox, Source Direct levels of drum science here. Of course he’s more than just a break slicer too – look no further than last year’s Strange Days LP on Seagrave for a more widescreen angle on the Etch sound.

Toasting five years since we first carried some of Zak Brashill’s advanced junglisms on Sneaker, and three since his 2018 album Ups & Downs, we’re thrilled to welcome him back for an excursion into the heart of his drumfunk practice. On the A side of this single the sound field is sparse and taut, echoing the stripped-back, minimalistic atmosphere Paradox just brought to SNKR029. All emphasis is on the drums, and the staggering contortions they’re bent into. Where there is additional sonic dressing, it comes in noirish chord drops and distant celestial vapours that add to the palpable sense of tension.

By the contrast the B-side welcomes in a little more human warmth, with a vocal hook on ‘Shadows Passed By’ that calls back to Smith & Mighty’s flip of the Bacharach soul standard ‘Walk On By’, and a collaboration with Luo that trades in blue-tinted vibes and airy diva vocals. In both instances, needlepoint beat programming is still key and an overall sense of restraint guides the composition, lingering in a sustained mood rather than breaking out in excess drama. Etch sounds more accomplished and in control than ever on this 12”, and we’re honoured to be releasing such vital additions to the jungle narrative.