Appleblim - Life In A Laser LP 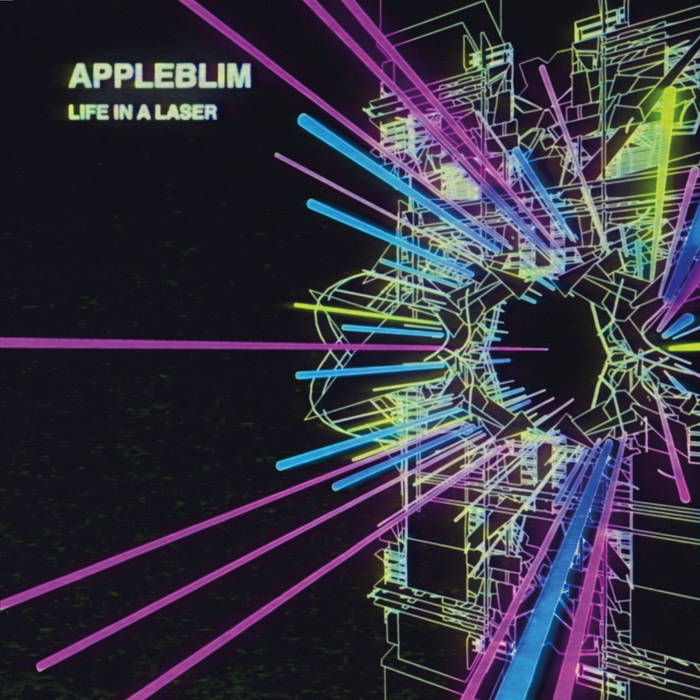 More than ten years since he first emerged on Skull Disco, Appleblim presents his debut album. The label he co-founded with Shackleton was the first the world heard of his productions, but Laurie Osborne’s innate relationship with electronic music culture reaches back much further than those groundbreaking early days of dubstep. Early days spent soaking up hardcore, jungle, techno and plenty more besides were fundamental foundations from which to spring into the then-unknown realms of sub-low half-step club music. At that time FWD>> and DMZ were the church for this ritualistic sound, and Appleblim was a regular fixture at both.

As dubstep matured, magnified, mutated and meandered, so Appleblim moved beyond Skull Disco to explore different avenues of expression in the new many-
layered club music landscape. His own Apple Pips imprint was a natural vessel on which to explore the emergent fusions of hardcore-derived sounds and the US-born house, techno and electro, while labels such as Aus Music equally provided a home for his work (often alongside Komonazmuk). Meanwhile long-standing collaborations with Alec Storey (Al Tourettes / Second Storey) finally manifested in the hyper-modern mind-twist of ALSO, captured as an album on legendary rave label R&S.

More recently it’s been possible to hear Appleblim delve into electro-acoustic and ambient production alongside bassweight sounds on Tempa, one of the original bastions of dubstep culture. As the existing boundaries between genres, cultures, eras and scenes continue to dissolve, on his debut album Appleblim offers up a fresh approach that brings some of the foundational sound ethics of
rave culture into a modern framework.

Hardcore breaks are still a regular sound source in contemporary club tracks, but on Life In A Laser it’s instantly apparent that Appleblim has moved beyond
choosing popular drum samples to truly tap into the elusive feeling engendered by the music of the era. It’s a tricky feat to manage, but in the pie-eyed chords of “Ignite”, the subby 808 tom basslines on “NCI” or the Mr. Fingers synth flex on “Manta Key” the sonic finish sports the same understated grit and grime that made those early records so timeless. There’s still space for modernism, not least on snaking 2-step killer “I Think We'll Let The Gas Sort This One Out”, but it’s offset by a layer of dust, not to mention an inherent moodiness that can’t be faked.

This fine balance of rave romanticism and future-minded approaches binds together in a cohesive conceptual statement. First and foremost it’s Appleblim’s personal reflection on the music that has moved him on countless dancefloors since his first flirtations with soundsystem culture. At the same time the canny influx of modern ideas into the soundworld of the 90s genuinely results in a new proposition, making for a perfect fit on the modern-day ‘ardcore fetishists label of choice, Sneaker Social Club. Many may claim to draw on old-skool influences in their modern trax, but take one listen to “Flows From Within” and you’ll feel the same time-slipping surge of future-shock as the ravers at Lost, Dreamscape, The Dungeons, Clink Street, Blue Note and all those other iconic spots.