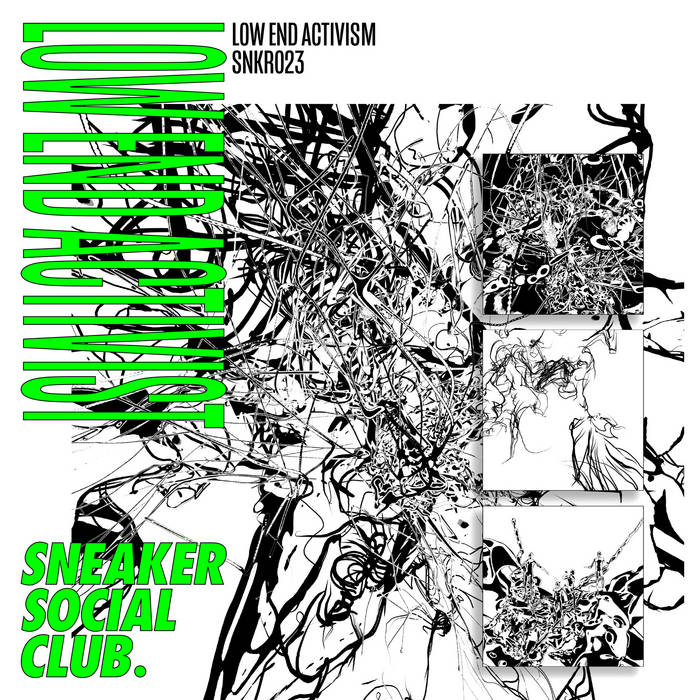 The latest transmission from Sneaker Social Club welcomes Low End Activist into the fold for a record that draws heavily on soundsystem culture and in particular its social function in the Afro-Caribbean communities it stemmed from.

The source material for this record of fractured bass pressure is a VHS recording of Muzikon Sound System, captured in 1988 on the Blackbird Leys estate in Oxford, UK. The vibe pours out of the scenes captured – it was a famously hot summer, and Earthy Irie’s crew set their rig up at the Blackbird Leys summer fair, gifting the community with a wall of sound blasting out ruff n’ tuff 80s dancehall while the local deejays toasted over the top. Elsewhere Street Level would have had their system set up playing UK Soul, Hip-Hop, Proto Rave and Acid House, while further down the field (known locally as ‘the wreck’) the annual five-a-side football tournament took place.

The fair was a symbol of the unity of the estate – a multi-ethnic working class community bound together both by the looming presence of the car factory (where a massive portion of the residents worked) but also the long simmering social divide in Oxford. Since the founding of Oxford University, the country’s elite have needed people to do their dirty work, predictably exploiting and marginalising them in the process. As the city and its colleges expanded, so these communities were ushered out of town. The tensions between the classes reached a flash point repeatedly throughout the centuries, and it was no different during the 1991 riots on
the Blackbird Leys estate. As with similar riots elsewhere in Britain – Brixton, St Pauls, Toxteth, and elsewhere – heavy handed, not to mention misguided, police tactics loom large in the story, where the elite and the authorities fail to understand the community, how and why it functions the way it does.

Drawing on this snapshot of Oxford life, far from the international facade of the city’s privilege and power, with a deep-rooted, personal perspective, Low End Activist channels the raw energy and expression of Muzikon’s sound and frames it in the dread bass pressure that such soundsystems directly led to. It’s not dark music, but rather an intense one, defiant and proud like the Blackbird Leys community and so many of the social situations that gave rise to rave culture in the late 80s and early 90s.
The people from the estate would take their skill, knowledge and access to ‘the factory’ and use it to joyride high-end sports cars – a celebration of personal liberty in the face of social barriers enforced by the very people who would buy such things. Now Low End Activist applies his own craft to an amazing artefact from decades past, not so much joyriding with it as respectfully doffing his cap to the community in a show of solidarity, letting the jubilant sound play out once more.

Oxford’s Class War and the Blackbird Leys Riots of the early 90s
libcom.org/library/oxfords-class-war-blackbird-leys-riots-early-90s