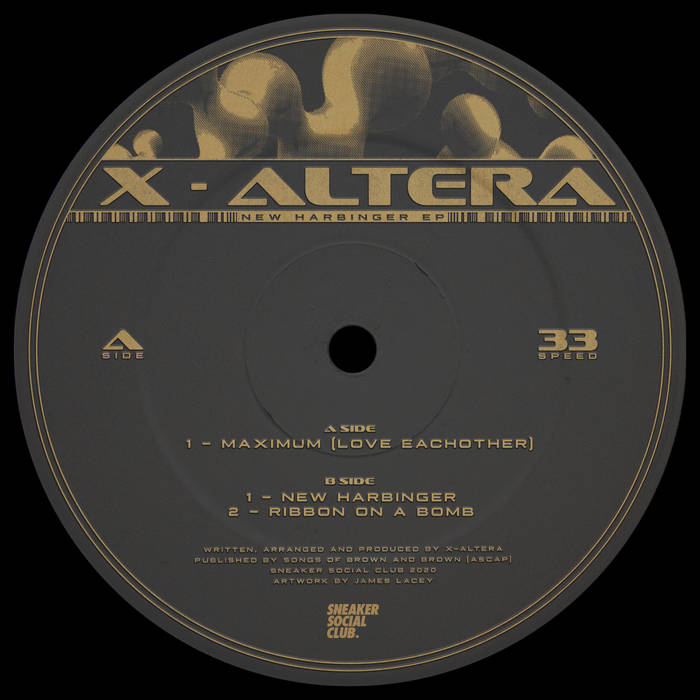 K-Stoge I wish there was more x-altera material out in the world. It’s so damn good. This is incredible music.

Following a jaw-dropping LP on Ghostly International in 2018, multifarious rave authority Tadd Mullinix reanimates his hi-tek junglist guise X-Altera for an EP on Sneaker Social Club. It’s a perfect fit between project and label, as Mullinix exercises his fearsome knowledge and grasp of foundational jungle and drum & bass on an imprint with strong form in the field (from seminal Foul Play works reissued to contemporary cut ups by Dead Man’s Chest, Etch and more).

Rather than straight-up revivalist sounds, as X-Altera Mullinix is more concerned with the original pioneering spirit of early jungle, hardcore and 90s techno. He absorbs and channels the sounds and processes of these influences with a razor-sharp attention to detail, but crucially he stitches his tracks together in a truly idiosyncratic way. Far from linear rollers, the pieces on New Harbinger EP play out more like suites that follow unpredictable paths and take in some stunning scenery en route. Doused in Detroit’s hi-tek soul, chiseled with the avant-garde angles of jungle’s breakbeat science and weaving a tangled narrative to rival a sci-fi epic, it’s a divine blend of rugged and raw rave music that can draw you deep inside and take you far away.

X-Altera is but the latest in a long line of crucial projects from Mullinix, who has been transmitting mind-boggling electronics from Ann Arbor since the late 90s. He’s previously delved into the ruffest ragga jungle with Todd Osborn as Soundmurderer & SK1, dropped devastating acid house bombs as James T Cotton (now steered towards a more focused strain of techno as JTC), delved into EBM and industrial as Charles Manier and helped set a blueprint
for leftfield hip hop beats as Dabrye. With an unerring quality barometer matched by his studious knowledge and understanding of rave culture, his work is a continuous gift to many different strains of dance music.

In many ways X-Altera feels like the logical summation of all Mullinix’s prior investigations; unrepentantly futuristic music sporting the best qualities of the past, clad in proudly ‘ardcore body armour and thus ticking every box going for Sneaker Social Club.